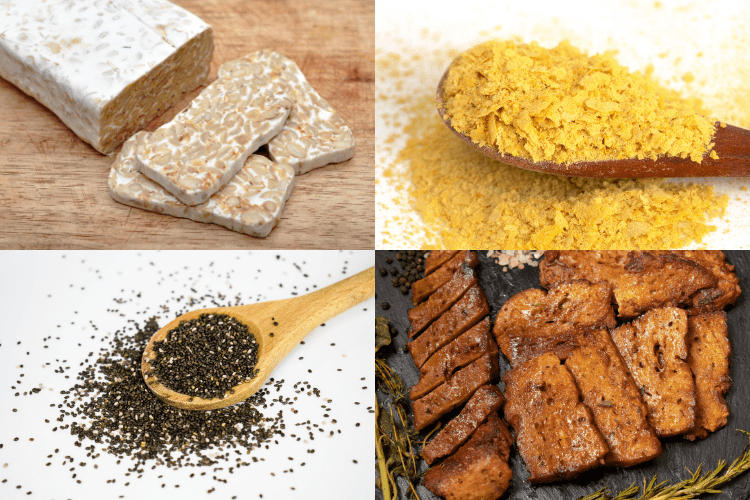 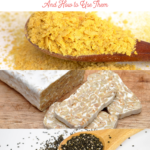 When you start delving into the world of vegan cooking, you’ll probably come across some pretty strange sounding ingredients. Things like Tempeh, Nooch, Seitan….

So what exactly are these ingredients? And do you really need them to go vegan? Well, no you don’t, but they make going vegan a lot easier and tastier!

Let’s start with good old Nooch. What is it? It’s an inactive form of yeast that vegans use to give a cheesey flavour to food. It is also an amazing source of B vitamins (as are all types of yeast) and often comes fortified with B12.

So how do you use it? Just put a spoonful into any recipe that you want a cheesey or savoury flavour. I use it in Cheese Sauces, Meatballs, on pasta… everywhere.

Now, a warning, you probably won’t like it when you first go vegan. I definitely found it was an acquired taste. If you’re only just giving up cheese, then I recommend waiting for a few weeks before you try it. (Check out my post here on how to give up cheese).

And where do you buy it? You can get Nutritional Yeast from health food stores, vegan grocers, and the health food section of most supermarkets. Just don’t get it confused with brewers yeast, which doesn’t taste at all the same (or plain old yeast that you use for baking).

Ah tofu, it gets such a bad rap, but when you learn how to cook with it, it becomes such a staple in vegan cooking. Tofu is a really versatile meat replacement. You can press it and marinade it, and it will take on just about any flavour. It is also high in protein, iron, calcium and zinc. All important nutrients to get on a vegan diet.

What is tofu pressing? When you press tofu, you press out some of the water. Then when you put the tofu into a marinade or sauce, it soaks up more of the liquid and has a much stronger flavour. Pressing tofu is quite easy. You just need to wrap it in paper towel, place it on a tray with sides to catch the liquid, and then put something really heavy on top. I often use my blender base, with some skillful balancing tricks….

Another thing you can do with tofu is freeze it. This completely changes the texture. If you freeze it, and then press it (after it’s defrosted), it soaks up even more flavour. Seriously, you have to try it.

And lastly, like most vegan foods, every brand tastes different. I wasn’t that keen on tofu until I found a brand that I liked (Woolworths Macro Brand in my case). So as always, keep trying different brands until you find what you like.

And now we’ll move onto Tofu’s hippy brother, Tempeh. Where tofu is made from curdled soy milk, tempeh is fermented whole soy beans. So it is a bit more whole foods friendly.

You can use tempeh as a meat replacement in any of your dishes, but it does have a stronger, nuttier flavour than tofu. You can find tempeh in some supermarkets, but you’ll often need to go to health food or vegan stores to find it.

Jackfruit is relatively new to the vegan scene, but it is definitely making up for lost time. The most popular use for jackfruit is as a pulled pork replacement, but you can use it as a meat replacement anywhere you want a more flakey or pulled meat texture.

Just buy a can of the fruit (or get it whole if you’re feeling very adventurous) and marinade the fruit in whatever flavour you like. I love using my bacon chickpea marinade to make bacon pieces for pizzas. It also works really well in BBQ sauce to get pulled pork, or I’ve seen it used with mayo for a tofu salad replacement.

You can get tinned jackfruit from most supermarkets these days.

Seitan is by far the most convincing meat substitute out there. It is made from the gluten protein in flour, and has quite a convincing chewy-ness to it that makes it great for substituting meat.

Seitan is very high in protein, but some people need to be careful with it because it is pure gluten.

You can buy gluten flour from health food and vegan stores. It is not to be confused with normal flour with gluten in it, or even gluten free flour (yes, I have been offered that in the pas). In the US it is known as vital wheat gluten, but we don’t have that brand in Australia, so it’s normally just gluten flour. A tip when buying: If the shop assistant doesn’t know what you’re talking about, chances are they don’t stock it and you’ll end up with the wrong thing. So just go somewhere else.

I have an easy recipe for a vegan roast that is a really good introductory recipe for seitan. If you’re looking for a chicken substitute, my favourite recipe is this one from It Doesn’t Taste Like Chicken.

Ok, now we’re moving on from meat substitutes to some of my other favourite ingredients. Chia seeds are such a useful vegan ingredient. When you add them to water, they gel up and make a great egg replacement. Just use 1 Tbs of chia seeds with 3 Tbs of water to replace an egg in your cooking. They work really well as a binder in rissoles and meatballs, and as an egg replacement in muffins and brownies. They don’t work as well in finer textured cakes like cupcakes and sponges.

One of the great things about chia seeds is you can use them as is, and don’t need to grind them up like flaxseeds (coming up next!).

You can also make yoghurts and puddings from chia seeds. I love to make this Chia Seed Yoghurt.

Chia seeds are high in calcium, iron, zinc and Omega 3 fats, so they’re really good to include in your diet.

Flaxseeds or Linseed are similar to chia seeds. They gel up in a similar way, but they need to be ground up first.

Flaxseeds are higher in Omega 3 fats than chia seeds, but not as high in calcium and iron. This article gives a great comparison between the two. Personally, I eat a combination of both.

Agar is a vegetarian form of gelatin. Gelatin comes from animal hooves, so it’s not a vegan ingredient. Agar, however, comes from red algae, so it’s all good!

I am still a beginner to cooking with agar, so I don’t have much experience. But it can be used in place of gelatin in most recipes. This post here gives you a comprehensive guide to how agar works and how to use it in recipes.

Miso is a Japanese ingredient that is used to add a savoury flavour to recipes. You’ll often find it in recipes for cheese sauces or gravies. There are different types of miso, and the white miso has the mildest flavour. You can generally find miso in health food stores and Asian supermarkets.

I’ve saved the craziest one for last. Aqua-what I hear you ask? This is definitely the craziest vegan ingredient I’ve come across. Wait for it, it’s the liquid from tinned chickpeas. I know, crazy, right?

What do you do with this ingredient? Well, it is an egg replacement. If you whip the aquafaba, it behaves like eggwhites. I know, I sound like a crazy person, I know.

I admit I’m still working on cooking with aquafaba, but I have seen some pretty amazing vegan meringues made with it. So next time you’re using chickpeas, don’t forget to keep the liquid and see what you can make!

So there you have 10 of the most common weird vegan ingredients. Have you come across any other strange ingredients? Let me know in the comments below!

How I Finally Gave Up Cheese and Went Dairy Free
Can My Child Go Vegan if They're a Fussy-Eater?
Raise Your Family Vegan | Step 2 Go Egg Free