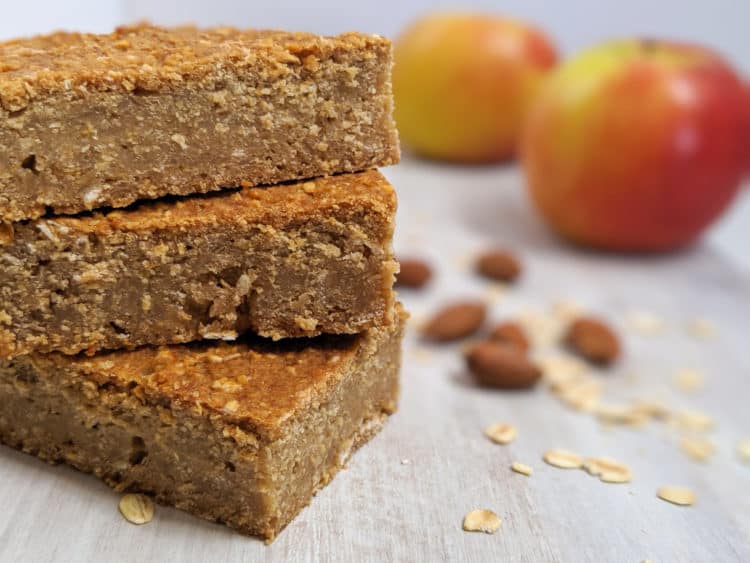 This vegan, toddler-friendly Apple and Quinoa Protein Slice is great for those days when you just can’t get your little ones to eat anything.

I have some days where I just can’t seem to get my two year old to eat anything – they generally happen around teething time. This slice is great, because it is soft, and easy on sore gums. It has just enough sweetness to appeal to kids (and parents, to be honest!) but is simple enough for young palates.

This recipe has a combination of protein sources – from the quinoa, almond meal and oats. All up, it provides nearly 6g of protein per serve. I don’t generally worry about protein, but on super fussy days, it can be a worry when they aren’t eating anything. The Australian Dietary Guidelines recommend 14g of protein per day for kids aged 1 – 3, so it’s good to know that just one serve of this slice will provide nearly half of their daily requirements.

I used a processor for this recipe. I find this gives the slice a smoother texture – more like a muffin or a cake – which my two year old finds easier to eat (especially when teething). If you want something with more texture, you can skip the processor and just mix everything in a bowl (which saves on washing up!).

Nut Free: If your little one can’t eat nuts, or you want this recipe for a nut free school or daycare snack, then simply increase the flour, oats and quinoa amounts to 1 1/3 cups each.

Quinoa Flakes: I can generally find quinoa flakes in the health food or baking section of the supermarket. I really like them for baking, because they add a complete protein source, and are high in iron. Unfortunately, they can be a bit expensive, so if you would like to reduce costs, they can be replaced with another cup of rolled oats. 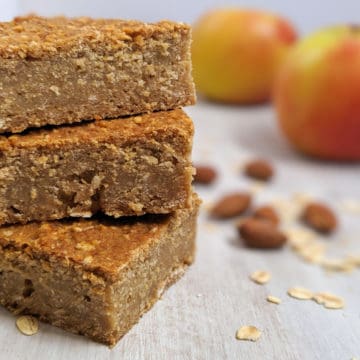 The large baking dish means that the slice is quite thin, and cooks through. If you have a smaller dish, use a lower cooking temperature and bake for longer to ensure that it cooks the whole way through.
Keyword Toddler