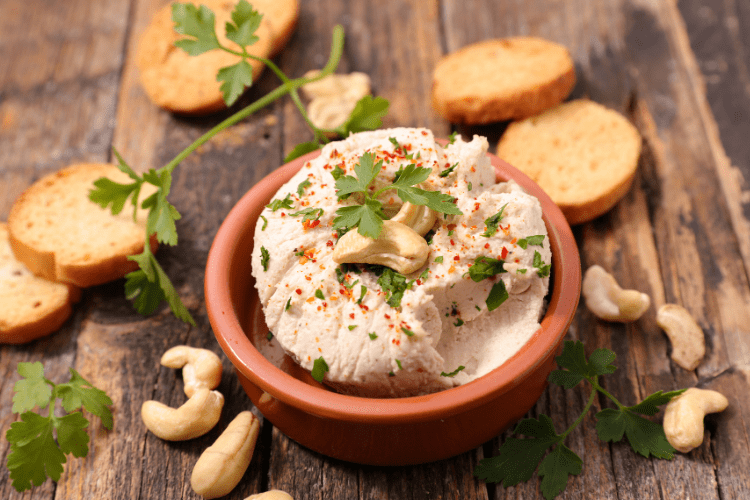 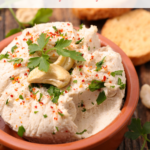 Ok confession time, it took me 3 years to give up cheese. Yes, you read that right. 3 years. Cheese was most definitely my kryptonite. I was all for going vegan, but for the life of me I. Could. Not. Give. Up. The. Cheese.

So, I spent years telling myself that I was doing a good enough job. I was mostly vegan, except for the cheese. That was enough, right? It was better than a lot of people! And then I would see pictures of calves, and think about what happens to the male ones…. and read about how calves were taken away from their mothers at birth, and once again I would be determined to give up cheese.

…. until it was pizza night again….

Finally I said enough is enough. I tried vegan cheese and ugh. I don’t know who does the taste testing of these things, but they DO NOT taste like dairy cheese.

Then I tried nutritional yeast, and let’s just say I was not a fan. There was no way that weird tasting stuff was going to meet my cheese cravings…

So I gave up on cheese. If I couldn’t find a replacement, and I couldn’t bring myself to eat dairy cheese, I would just go without.

I tried leaving the cheese out, but everything I ate really seemed like it was missing something. Cheese-less pizza? It really is as bad as it sounds. So I went looking for recipes that didn’t actually need cheese. Instead of pizza and pasta bakes, I had stir fries. I ate curries, and schnitzels and veggies.

Then one day a few weeks later, I was in a fancy deli buying pasta and found some vegan parmesan. I was seriously craving a nice bowl of pasta with parmesan, so I decided to give it a try. And you know what? It actually hit the spot. It gave the pasta a salty, savoury flavour, and I really liked it! Maybe life wouldn’t be so bad if I could at least have pasta with parmesan again….

Then I came across a vegan mozzarella recipe. I was seriously craving pizza…. So I decided to give it a go, even though it had that horrible nutritional yeast in it.

Guess what? It actually tasted good. Sure, it didn’t taste like dairy mozzarella, but my pizza still tasted great. AND it didn’t hurt any animals.

So it looked like pizza was back on the menu, too. Maybe this vegan thing wasn’t so bad.

Then one day I was out and there were no vegan options on the menu. So, I figured I’d have a pizza with dairy cheese. It was only once, after all.

Big Mistake. Not only did it make me the sickest I’d ever been from food (picture me curled up on the lounge crying all night from the cramps) but it was absolutely disgusting. It just tasted like congealed fat. How did I used to love this stuff?

And that was the last time I ever had dairy cheese (intentionally… there have been some unpleasant accidents unfortunately….).

How to Give Up Cheese

1. So, how do I recommend you give up cheese? Go Cheese free for 30 days. That’s diary cheese, vegan cheese, and any other cheese replacements. Replace all of your cheesey meals with recipes that don’t need cheese, so you don’t feel like missing out. I had vegan schnitzels and veg, vegan sausages and veg, Indian Curries like my Korma, Thai curries and stir fries, and Chinese.

2. After 30 days, slowly start to reintroduce substitutues. Try vegan parmesan on your pasta (you can grind up a cup of cashews, 2 Tbs nutritional yeast and 1/2 tsp salt).

3. Then make meals that mix in cheese. I use my Instant Cashew Cheese Sauce in place of cheese in most recipes. Try Mac and Cheese, Meatball Pasta Bake, Pumpkin and Zucchini Risotto.

4. Finally, try cheese on it’s own. I really recommend that you try brands until you find one you like, because they all taste different. The supermarket brands work best in normal cooking. If you’re looking for a cheese for a platter, you’ll find really nice sesame or nut based cheeses at your local vegan grocer or health food store.

And that my friend is how you give up cheese.

Do you have any tips on how to give up cheese? Share them below!

If you’re a new vegan, or looking for more recipe ideas, grab my family friendly beginner meal plan below.