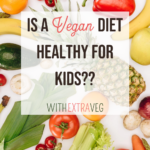 Okay today we’re tackling the big question: Is a vegan diet healthy for kids? Can growing children stay healthy on a vegan diet? Or do they need meat, eggs and dairy to thrive?

There is so much information out there around this question. No matter who you talk to, everyone seems to have an opinion. And have you noticed that the people with the strongest opinions often have absolutely no training whatsoever in nutrition? Or is that just me….

To answer the question, is a vegan diet healthy for kids, I’m going to go to the dietary guidelines. Why am I using the dietary guidelines? These have been developed in conjunction with hundreds of dietitians and nutritionists, who have reviewed all of the literature to put the guidelines together. Yes, I agree that they have some issues where industry has a lot more influence than they should. But the guidelines are based on a lot more research and knowledge than a chef quoting an article about a study….

So, what do the Nutritional Guidelines say about Kids and Vegan Diets?

Since I’m an Aussie, I’ll start with the Australian Nutritional Guidelines. They state that:

So, there’s one vote for a well planned vegan diet is healthy for kids.

The Australian Dietary Guide also includes vegan options in all of their food groups, so you can easily follow the food groups on a vegan diet.

Let’s look next at the UK

The UK specifically talk about kids on a vegan diet. The Eat Well guidelines state that:

“Babies and young children on a vegetarian or vegan diet can get the energy and most of the nutrients they need to grow and develop from a well-planned varied and balanced diet.” (2)

The UK Eat well site even gives some great tips on how to find vegan sources of the important nutrients such as B12 (supplementation only), calcium, iron, vitamin D and omega 3 Fatty acids.

And another vote for a well planned vegan diet is healthy for kids.

So, What do the US Dietary Guidelines say about a vegan diet for kids?

The US Dietary Guidelines do not specifically talk about vegan and vegetarian diets for kids. They do, however, have vegan options in all of the suggested food groups, like the Australian Guidelines (3). So it is possible to follow a vegan diet according to the US Guidelines.

So, more votes in favour for a well planned vegan diet is healthy for kids.

And Finally, What Do the Canadian Nutrition Guidelines Say About a Vegan Diets?

And lastly, let’s look at the Canadian Dietary Guidelines (6). You actually might have heard about these if you’re in any vegan groups. There was a lot of talk after they were released because they’re the first dietary guidelines to drop dairy as a food group. They also specifically talk about opting for plant based proteins (so beans, lentils, tofu, nuts and seeds) over animal ones. So it is definitely possible to follow these guidelines on a vegan diet!

So there’s yet another vote in favour for a well planned vegan diet is healthy for kids.

A Well Planned Vegan Diet is Healthy for Children

So the major dietary guidelines all basically say the same thing. A well planned vegan diet is healthy for children. But what does that mean? And should I be worried if my kid’s diet is not “well planned”?

Well, a well planned diet is simply a balanced diet that has all of the food groups. So for vegans it would be: wholegrains, fruits and vegetables, protein foods and calcium containing dairy substitutes, plus a B12 supplement (B12 is an essential vitamin and you can’t get it on a vegan diet). To be honest, it’s not all that different to a omnivore diet.

The Guidelines often have special mentions of some particular nutrients that can be more difficult to get on a vegan diet. You need to be careful about iron, calcium, zinc, and vitamin D in some areas. Plus you do need to supplement B12.

It is a really good idea to book in with a vegan friendly nutritionist or dietitian to talk about going on a vegan diet. They can help you out with any special requirements you or your kids might have.

If you have fussy kids, and you’re having trouble getting them to eat a well balanced diet, check out my post on Healthy Foods for Fussy Kids, and How I got my Kids to Eat Legumes. You should find some great tips there!

So, there you have it. A vegan diet is healthy for kids as long as you plan it well. Next time someone questions you on your diet choices, you can show them this post! I’ve also referenced it so that you can even take it to your doctor if you need some evidence to back you up!

Comment below and let me know what other vegan nutrition questions I can answer for you!

2. The Eatwell Guide: Vegetarian and vegan babies and children, 2019