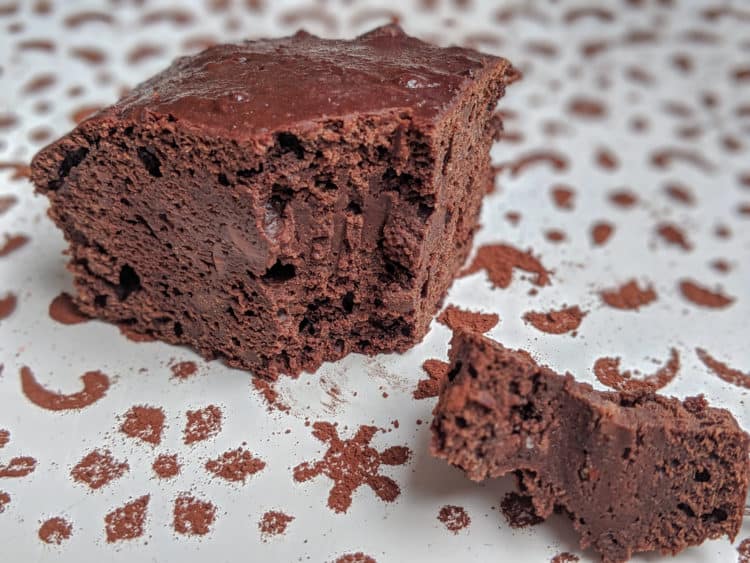 You’ll never believe that these super rich and chocolate-y brownies are oil free and vegan! Even omnivores will be begging for the recipe!

I have noticed a lot of requests pop up on social media lately for vegan brownie recipes. Unfortunately, the majority of recipes that I have found out there are either full of coconut oil or vegan butter replacements, both of which I try to avoid.

All this mentioning of brownies though was giving me some serious cravings. So I decided to have a go at my own oil free recipe.

I decided to try out this recipe for the first time as something to take to a school playdate to share. This gave me the added challenge of the brownies having to be nut free. I was in such a hurry to make them, that I actually turned up to the playdate with them still warm in the tray. (Side note, these are amazing warm and just out of the oven!).

I never know quite what to expect when I tell people our family is vegan for the first time. I definitely got some dubious looks when I told everyone that I made nut free, oil free, vegan chocolate brownies. One of the questions I got was “well then, what is in them?”.

Anyway, to cut a long story short, everyone absolutely loved the brownies, and couldn’t believe that they were actually healthy (well, mostly…). I even had several of the people begging me for the recipe.

You can make this in either a processor or a bowl. I find that the processor is much quicker, but the brownies lose a bit of their fudge-y consistency if you over process them. Of the two options, I preferred them after hand mixing in a bowl.

Place all dry ingredients in a bowl or food processor. Mix until fully combined.

Make a well and add the wet ingredients and chocolate chips to the dry. Mix or process the mixture until just combined. Try not to over-process, as this can make the brownies lose their fudge-y texture.

Pour mix into prepared tray and bake at 180 degrees for 20 – 25 minutes. I always cook mine for the 20 minutes because I like them still raw and goo-ey in the centre.

This recipe uses apple puree as an oil replacement. When you’re making these, the mix will smell faintly of apple, but there is no taste of it once they’re cooked.

You can replace the apple with mashed banana, but I find that you can taste the banana faintly in the brownies, so they aren’t a true chocolate flavour. You could also use soy or coconut yoghurt.

Gluten free: I tried this recipe with gluten free flour, but it lost the fudgey consistency that makes these brownies so good. It is possible that they could be made with a combination of gluten free flours and nut flours, but I haven’t tried it.