This vegan BLT pasta salad is the first of a series of budget recipes that I have been working on. It is a really cheap and easy recipe, but it tastes amazing! I love the really strong salty taste from the chickpea bacon and sundried tomatoes. Who would have thought that such simple ingredients would taste so good together?

This BLT Pasta Salad recipe is very versatile. It makes a great work lunch, warm and comforting salad, or you can even make a double batch and take it to a BBQ or potluck to share. It even works as a light summer dinner (or winter dinner warmed up).

Cook your pasta according to the packet directions.

While the pasta is cooking, cook the bacon chickpeas, making sure to keep aside about 1/3 of the dressing for later.

Once the pasta and chickpeas are cooked, add the pasta, baby spinach and sun-dried tomatoes to the chickpeas. Pour over the remaining dressing. Toss until the baby spinach is just wilted.

Serve topped with vegan Parmesan, or store in an airtight container in the fridge for later. 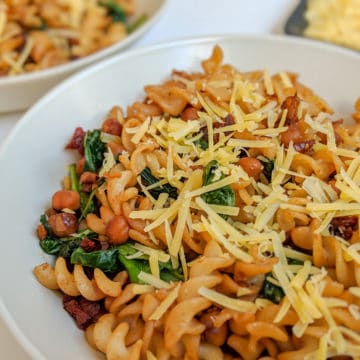 This recipe makes enough for 2 adults and 2 children.