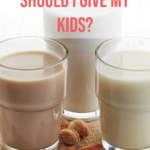 One of the biggest questions that I hear when people want their family to go vegan, is what plant milk is best for kids?

We’re all told that kids need cow milk for calcium. But do they really?

First up, kids do need calcium. They need it to grow strong, dense bones. It’s important that kids get enough calcium when they’re growing, because once we reach our 30s, we stop building bone, and whatever we’ve got then is all we get for life.

So, yes, kids need calcium. But do they need milk to get it? And I’m not just talking about cow milk here, do they need any form of cow or plant based milk? Well, technically, no they don’t. There is calcium in most foods, but it is far easier to get it from different milks. I’ve put some common high calcium foods below for you to get an idea of how much calcium is in them (remembering that the average 6 year old needs about 700mg calcium a day).

So yep, you can definitely get calcium from foods other than milks, but I tell you what, it is a lot easier for me to get my 4 year old to drink 2 cups of soy milk a day than 3 bunches of bok choy and 4 handfuls of almonds.

So, the next question is do kids need cows milk for calcium? And the answer is, no. Many plant milks are now fortified with calcium, so they have the same amount of calcium as cow milk.

So, which is the best milk for kids?

Well, for starters, if you’re replacing cow milk, then you need a plant based milk with at least 300mg calcium/cup. As I said, many plant milks are now fortified, so they should have this much calcium. You can check the nutrition panel on the back to check.

Now, some plant milks are better than others for kids. The best are soy, oat and pea milks (these are more readily available in the US than Australia).

Other vegan milks like almond and coconut aren’t as good (I know many people won’t like me saying that!). This is because the commercial ones are mostly water – don’t believe me? Check the ingredients! Now, why is that a problem (apart from the fact you’re basically paying $4 a Litre for fancy water…)?

Well, the trouble is, when kids drink almond milk, the liquid fills them up, but it’s pretty empty of useful nutrition. This means that they feel full, so they will often eat less of other food, but they’re getting mostly water and oil which doesn’t have much nutrition. This isn’t such a problem if the milk they’re drinking has a decent amount of protein, fat, calcium and other nutrients, but when it’s just mostly water and a bit of oil, they’re missing out.

Having said that, it’s really common for kids to fill up on all milks and not eat enough (my 4 year old loves doing this). Kids need a balanced diet, so try to limit their milk intake to 2 – 3 cups a day on most days.

I’ve put together a table to show you the nutrient content of different plant based milks, compared to cow milk. I have a bit less info on Pea Milk because it’s a US milk, so I don’t have as much access to the nutrition info for it.

*Note, this is from the nutritional datbase that I use (Foodworks), and results may vary depending on brands.

As you can see in the table, soy, oat and pea milks are far more nutritious than almond and coconut (there are some missing nutrients for Ripple Milk because it is not available in Australia, and that’s all the info they had on their website).

So, if you’re looking for a plant based milk for your kids, then a fortified soy milk is the best option. If your kids have a soy allergy, or you’re avoiding soy, then oat and pea milks are good options as well, although you can boost their fat and protein levels by blending in some nut butter.

If you’re looking for some high calcium kid friendly recipes, then check out my Chia Seed Yoghurt, or my Super Veg Chocolate Smoothie, that my eldest literally lived on for about two years.