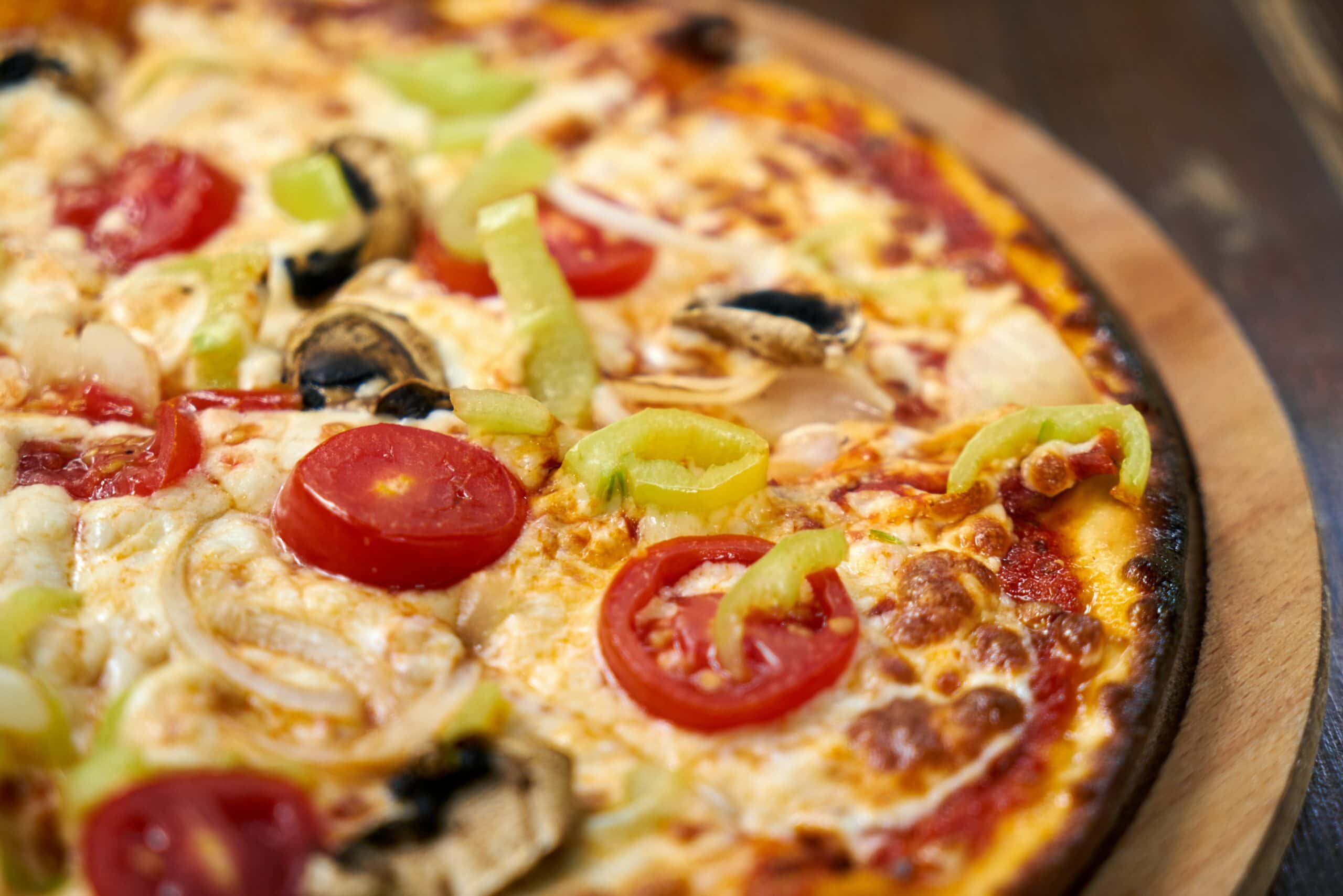 So, you’ve decided to go vegan. You’ve got my 7 Day Meal Plan, and you’ve got some new favourite recipes to make at home.

But after a few weeks, you’d kinda like a night off. But now that you’re vegan, what take away can you actually have?

Well, I’ve put together the Ultimate Guide to Vegan Takeaway for you.

Dining out can be intimidating to start with. When I first went out I used to just settle for vegetarian. Back then (by the way, this was only 3 years ago) it was quite hard to find vegetarian options, much less vegan. Luckily, a lot has changed in the past few years, and you have a lot more chance of finding something vegan now. Of course, you still have wonderful food establishments like a pub in Brisbane which advertises itself as “the worst vegetarian restaurant” but I honestly believe that we vegans are going to have the last laugh….

How to Find a Vegan Restaurant or Take Away

The easiest way to eat out when you first start is to find a vegan specific place. That way you can order whatever you want off the menu, and it’s easy.

But how do you find a vegan restaurant?

First off, I really suggest that you install the app HappyCow. It’s free, and it gives you a list of all the vegan and vegetarian places nearby. Plus it tells you other places that serve vegan food. So it’s a really good place to start.

If you don’t find something there, then try googling for restaurants around you. I often do this when I’m going to a new place. Sometimes people will also put in reviews what dishes they had, or even how accommodating the staff were. Trust me, you don’t want to go somewhere with rude staff when you’re first starting out (or ever, really…).

And finally, see if you can find some vegan groups online. There are heaps of location specific vegan groups on Facebook. You can either ask for recommendations inside, or there might be listings of vegan places. Plus you might be able to meet some likeminded friends in them too!

If you’re not a Facebook fan, then you could try Slack channels, Meet Up groups, Telegram… I’m not on any of these sites, but I have heard that there are groups that you can join on them.

How to Order Vegan from a Non Vegan Restaurant

So you’ve checked online, but there isn’t anything vegan close by. What now?

My first suggestion is to make friends with the waiter. Not too long ago, I went out for dinner with my extended family. We ended up at a pub that had absolutely NOTHING vegan on the menu. There weren’t even vegetable sides that I could put together as a meal.

But, I smiled sweetly at the waitress and explained that I was vegetarian, but can’t have dairy or egg (I find that works better than saying straight out vegan) and asked her what I could have. I ended up with the most delicious vegetable pizza EVER, a side of chips (they weren’t actually on the menu) and a side of veggies. I couldn’t believe how delicious my meal was!

It also pays to have an idea of what types of foods can easily be made vegan in different cuisines. I’ve put together a list of the easiest options for each type of restaurant, and what to watch out for.

Indian cuisine has a lot of vegetarian food, but unfortunately they can have a lot of hidden dairy. Watch out for creamy curries like Korma, which are often made with cream. Another common ingredient is paneer, which is a type of Indian cheese. Some restaurants will replace paneer with tofu for vegans. Also watch out for ghee, which is clarified butter.

Your best bet is to go for the tomato curries, rather than the creamy ones.

Asian foods can be a good option, because they don’t normally have dairy, so that’s one less thing to worry about. You need to watch out for fish and oyster sauce, chicken, beef and fish stock/broth and egg. I normally order vegetarian spring rolls, salt and pepper tofu, vegetables in garlic, ginger or cashew sauce and steamed rice.

That is another one that doesn’t use dairy. They often use fish sauce in the curries and stir fries, and you need to watch out for stock and broth. I normally order vegetarian spring rolls, vegetarian curry puffs, vegetable tempura, green or red curry with tofu, basil and chilli tofu stir fry and rice. I find that many Thai places will now give you a vegan option for their stir frys and curries, which is great.

Mexican food seems to be the latest trend in Australia. One thing to watch out for with Mexican is that they often make the beans in lard or beef stock. The beans are often precooked, so you’ll have to contact the store to ask before you order if it isn’t on their website. Most of the Mexican places in Australia have vegan beans, but it’s still important to check. Once you’ve confirmed the beans are ok, you just need to be careful of toppings like cheese and sour cream. I normally order my food without them, but with extra guacamole, or sometimes I’m lucky enough that they have vegan alternatives.

Vegan burgers are an interesting one. It’s really common these days for places to use vegan patties, but make them on a non-vegan burger. How’s that for confusing? Also, plant based unfortunately doesn’t always mean vegan, so watch out for that, too.

So, watch out for egg and dairy in vegetable patties, and then cheese, egg, butter and bacon (yes, there is a popular chain that puts bacon with their vegan patties) on burgers, and then check that the actual bun is vegan, too. If you’ve managed all that, you should be safe.

Another easy take away option is pizza. I’m sure you’ve discounted it straight away, but vegan pizza seems to be the next big thing in vegan options. One thing to check is the base, especially if you order gluten free. Unfortunately, you will really struggle to find a gluten free base that’s made without egg.

There are a lot more pizza places offering vegan cheese these days, and some places even have vegan meat options, too. Another option is to simply forgo the cheese. This works surprisingly well if you get plenty of veggie toppings.

Just a word of warning, there are a lot of stories circulating about cross contamination from some of the larger pizza chains, where vegan pizzas arrive with non vegan ingredients. Make sure you double check your order. Vegan cheese doesn’t brown like dairy cheese, and it isn’t stringy. Vegan meat alternatives look distinctly different to meats, so double check on the company website if you’re in doubt. Also, don’t be afraid to call up and ask for a replacement if you think your vegan pizza has non vegan toppings.

Here’s another Asian food option that doesn’t normally use dairy. Like the other Asian cuisine options, you need to watch out for fish sauce and fish stock. There can also be egg in the mayonnaise. I normally stick to the vegetable and avocado sushi, vegetable tempura, edamame beans and Inari.

Unless you go to a vegan fish and chip shop, you obviously need to forgo the fish. Here in Australia they normally use vegetable oils to deep fry, but some places will use duck or beef fat. Some people also don’t count food as vegan if it has been cooked in the same oil as animal products, but I feel that’s a personal choice. I normally have chips, potato scallops (or whatever you happen to call them in your state) vegetable dim sims, and hopefully a salad if they make a vegan one.

You’ll be surprised at how many vegan options you can find in pubs these days. There are, of course, the usual chips. But it’s becoming more and more common to find a vegan entree on the menu, and then something like a burger, or a pizza. Some of the more innovative places have even more exciting options, so make sure you check out your local pub to see what they offer.

Phew, so as you can see, there are a lot of options out there! I hope that you’re now feeling super confident to order your first vegan restaurant meal!