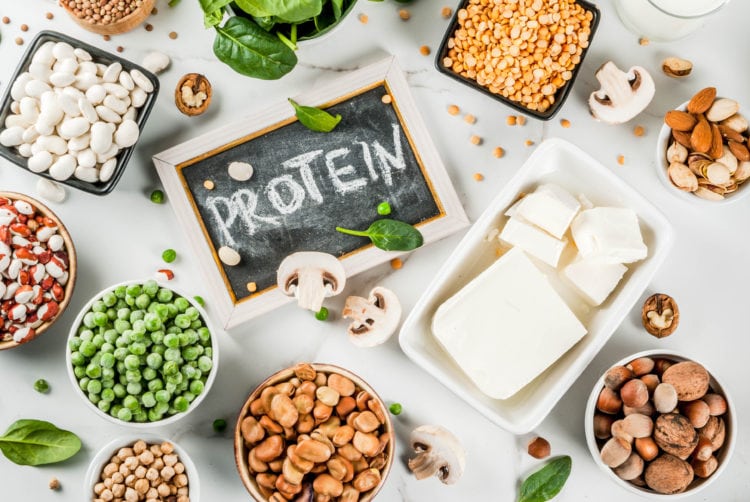 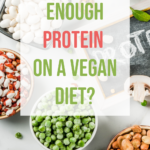 “We would go vegan, but my kids need meat for protein.” If I had a dollar for every time I heard that….

Today we’re going to talk about the biggest question ever asked about a vegan diet. Where do you get your protein?

There are actually two parts to the eternal vegan protein question. Can you actually get enough protein on a vegan diet, and can you get your essential amino acids on a vegan diet (most people probably don’t really know what they are, but everyone knows you can’t get them all if you’re vegan, right?).

And more importantly, can your growing kids get enough protein?

Short answer, yes. If your kids are eating enough food, then they can get enough protein on a vegan diet.

How Much Protein Do Vegan Kids Need?

Let’s take a look at how much protein kids actually need. Protein is essential for growth, so kids need it more when they’re growing lots. The amount needed also depends on the child’s size.

How Much Protein is In Vegan Food?

As you can see, there is protein in everything. Sure, some foods might only have 3 grams in them, but it all certainly adds up over the day!

My 8 year old normally has two slices of wholemeal toast, with peanut butter and a glass of soy milk. That meal alone has 23g of protein in it, with is more than he needs in a whole day. You could even give that to a teenage boy, and that’s 1/3 of his protein needs for the day.

And my super fussy 4 year old. Well, he ate 4 bananas the other day, and 1 cup of soy milk. It was certainly not one of my best nutritionist parenting days. But even that dismal day of food had 22.7g of protein in it. Still more than he needs in a day.

It comes back to amino acids, which are the building blocks of proteins. There are 9 essential amino acids that we need to get from food, and the rest our body can make.

There is a very common myth in the nutrition world (and just the internet in general) that plant foods are missing some of these essential amino acids. Many nutrition people teach that you need to combine proteins to get enough amino acids.

That actually isn’t true. Vegan foods contain all of the essential amino acids (2). It’s just that different plant based foods contain different amounts of each one. So as long as your kids are eating a varied diet, they’ll be getting all of their amino acids. So, as long as they have pasta and some tofu or lentils, then they’re fine.

The one time this can be a problem is if a child only eats a single type of food – so all they eat is pasta, rice or corn. This tends to happen in countries where they have less access to food, but can also happen with a super fussy child. If your child has a super limited diet, then it is worth a trip to a dietitian or GP to talk about diet, and check your child is getting enough protein.

So Vegan Kids Can Get Enough Protein

So, as you can see, the panic about protein in vegan diets is a bit over hyped. It is very easy for your kids to get enough protein on a vegan diet as as long as they are eating a varied diet, and eating enough.

You can check out my post on what the Dietary Guidelines say about a vegan diet – Is a Vegan Diet Healthy for Kids?

There are, however, some nutrients that you do need to be a bit more careful about. I’ve put together an easy print out guide to the top 4 nutrients for vegan kids. Sign up below to get it and put it up on your fridge for easy reference.

How Do I Stop the Bloating?
Top Tips for Back to School Vegan Lunchboxes
How to Get Kids to Eat More Cauliflower