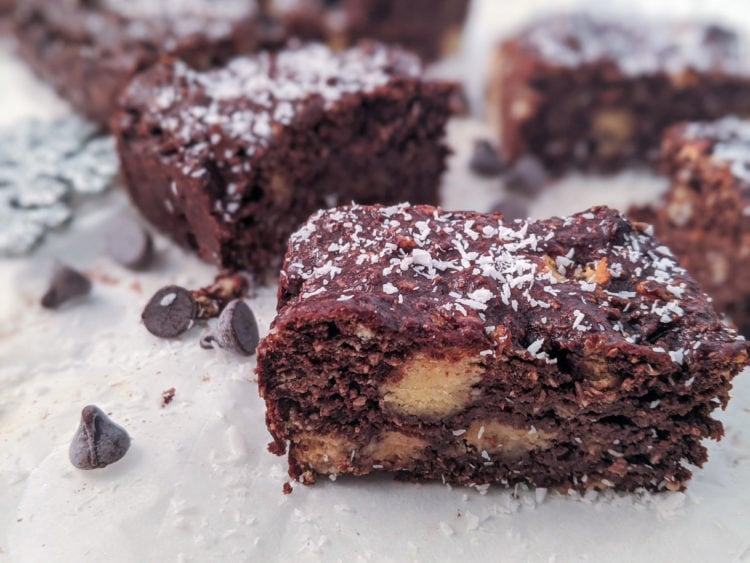 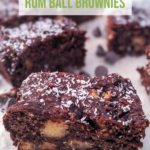 These Vegan Rum Ball Brownies make the perfect dessert to bring to a Christmas Party. They combine the Christmas flavours of Rum Balls with delicious fudgy chocolate brownies.

These brownies are based on my delicious Oil Free Chocolate Brownie Recipe. They use vegan Scotch Finger Biscuits, coconut and rum to make them extra Christmas-ey.

I used the Woolworths Free From Scotch Finger Biscuits for this recipe, but you can use any vegan plain sweet biscuits.

This recipe uses apple puree, which I find in small tubs in the tinned fruit section of the supermarket. If you can’t find apple puree, you can replace with unsweetened apple sauce.

Preheat oven to 180 degrees C and prepare a small rectangular baking dish by lining it with baking paper.

Place the biscuits in ziplock back and crush with a rolling pin until they’re broken into small pieces.

Place flour, coconut, sugar, baking powder and cocoa in a bowl and stir with a wooden spoon until well mixed. Add broken biscuits and stir.

Make a well in the centre and add apple puree, milk and rum. Mix with a wooden spoon until just combined.

Pour mix into prepared baking tray and smooth the top.

Bake for approximately 20 to 25 minutes, until the top is browned. I like to keep the brownies gooey in the middle so that they are nice and fudgey when they cool. 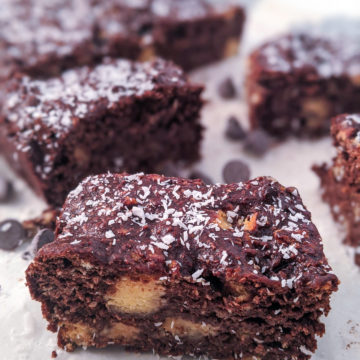